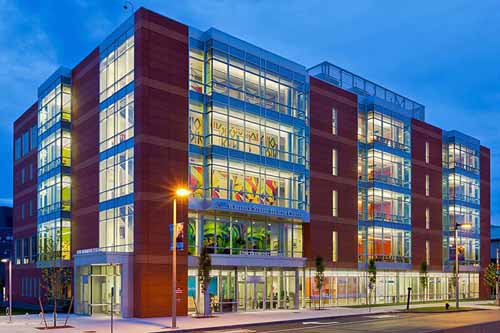 The History of Whittier

To understand the history of Whittier, it first helps to go back to the 1800s. That’s when the field of public health mushroomed following the discovery that germs were responsible for many of the diseases that killed millions of people a year in the 1800s. Public health measures like sanitary water supplies, sewage treatment systems, and later immunizations, dramatically reduced these diseases and increased life expectancy.

The Boston Public Health Department played an important role in these successes and it was an early pioneer in taking public health to the neighborhoods. In 1922, the City of Boston tapped the charitable fund of one of Boston’s great philanthropists, George Robert White, to begin construction of “health units” in the most needy neighborhoods of Boston. They provided maternal and child preventive health services, tuberculosis prevention and control, nursery schools for malnourished children, preventive dentistry, mental health “guidance,” and other preventive health education. Public health nurses worked out of the facilities and visited every known child born in Boston, tracked communicable disease, and administered immunizations. Rates of such communicable diseases as dysentery, tuberculosis, and diphtheria plummeted. 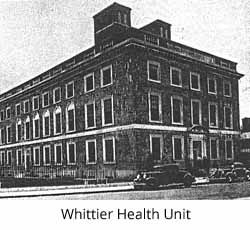 In 1933 the Whittier Street Health Unit was the seventh, and last, of the Boston Health Units to be constructed, and it was the crown jewel of the seven.  It initially provided services mainly to the predominantly Jewish residents of Roxbury and the predominantly Irish residents of Mission Hill.  Not only did it provide the above health services, but a chlorinated wading pool for children and a park were built adjacent to the building which attracted thousands of people a year.

New focus on communities in 1960s

Meanwhile, the civil rights movement sparked a national interest in the plight of the poor during the 1950s-60s, and community organizations formed in cities around the country to combat urban problems. The Johnson administration launched a “War on Poverty” in 1964 to fund anti-poverty programs

This funding would soon come into play in the establishment of community health centers, because at around the same time, in the run-down Columbia Point neighborhood of Dorchester (where the JFK Library is now located), a young physician named Jack Geiger and a colleague from Tufts University, Count Gibson, had their sights set on combining traditional medical services with a public health approach at the local level. They convinced Johnson’s Office of Economic Opportunity to pay for a demonstration project, to be built in an abandoned parsonage at Columbia Point, and thus the first community health center in the U.S. was born. 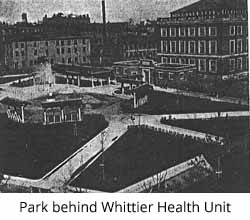 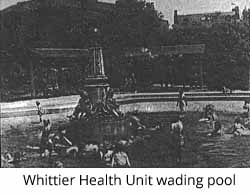 A few years after that, Senator Ted Kennedy toured Columbia Point and, becoming a believer in the mission of community health centers, shepherded legislation through Congress to improve funding of health centers around the U.S. By 1971, there were 19 community health centers in Boston, more than in any other city (which is still the case today). They were mainly funded through a combination of federal grants and visit reimbursements from the new federal Medicaid and Medicare insurance programs. And, in Boston, the city government persuaded area hospitals to help fund the new health centers, in part to appease neighborhood residents who had been dissatisfied with the local care hospitals were providing.

These community health centers, based on the new model of combining public health with traditional health care, began to replace the public health units. In 1967, the Whittier Street Health Center was born, housed in the original public health unit building on Whittier Street (which still stands today, though boarded up). Its Board of Directors drew largely from the surrounding community, and the goals of the health center were mainly driven by the community, in line with community expectations of the time.

This community-driven perspective was enshrined in the Whittier articles of organization, which are still in effect today, and which state that the purpose of the health center is “to provide a mechanism for meaningful and vigorous involvement of people from the community in the development of comprehensive health care services which meet the needs of such people as they define them [and] to provide a forum for health care providers and leaders from the community to plan jointly for the optimal allocation and utilization of health care resources in the community.” 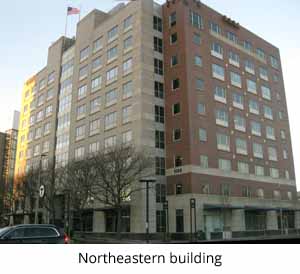 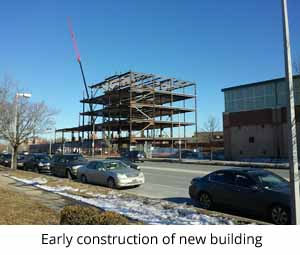 In subsequent years, Whittier expanded its mission well beyond that of the original public health unit to provide a range of comprehensive services. In the early 1970s, Boston’s first methadone clinic, run jointly with Boston City Hospital, was based at Whittier. In the 1990s, a satellite clinic was established at the Mission Main Housing Project, which continued until the Mission Main Housing Project was razed in 1996. In 1994, Whittier established an Urgent Care center in the back of the Roxbury Crossing T station, which remained there until 1999, when it moved to the main clinic.

Whittier had outgrown its original facility by the 1990s, and by 1999 it moved into several floors of a building acquired by Northeastern University at 1125 Tremont Street, next to the Ruggles T station. Northeastern had been awarded the building by the City of Boston due, in part, to its promise to give back to the community by leasing the building rent-free to Whittier

Over the past 40 years, Whittier has been led by three executive directors: Elmer Freeman, from 1980-1997; interim directors, including Tom Kefir and Phyllis Cater, from 1997-2002; and Frederica Williams since 2002.

Whittier remained in the Northeastern building until it moved into its current site at 1290 Tremont Street in 2012, the first facility in its history to be entirely owned and operated by the health center. It opened a satellite clinic, Quincy Commons, on Blue Hill Avenue in 2018.